I’ve long been a fan of the Ford Focus. I’ve spent extended time with the first-generation hatchback in Europe, as well as the more recent Focus ST and RS here in America. But now the Focus is no more on our shores, as the redesigned all-new car has been reserved for markets that are decidedly not ours. Indeed, Ford has decided to soon only sell trucks, vans, SUVs, and the Mustang in the U.S.; the sales numbers don’t lie and there’s more money to be made on bigger, more expensive models. But what are we missing out on with the latest model? I snagged one in the U.K. to find out.

As with its predecessor, the latest Focus can be had as a sedan, a five-door hatchback, or a wagon. The version of the car I ended up testing was the top-spec Vignale version of the wagon. Vignale traces its roots back to 1948 and was originally an Italian coachbuilder. Ford bought the company in 1973 but didn’t properly utilize the fun-to-say name—vin-YA-le!—until establishing the Lincoln Black Label–like sub-brand for Europe in 2013.

Vignale models get a splash of unique trim and styling details as well as enhanced customer service. In Europe, where Ford has a slightly more upmarket reputation, the company would be far better served taking the luxury market earnestly instead of whimsically adding extra badging and leather to otherwise workaday cars. It should follow, say, the Audi A3 and Volkswagen Golf relationship and make an honest go at creating a premium car.

That said, at least the latest Focus is loaded with standard or available technology and safety features, including lane-keep assist, a head-up display, pre-collision assist, and radar cruise control with intelligent speed assist via traffic-sign recognition. And there are adaptive LED headlights that automatically adjust for varying speeds and weather conditions. Plastic quality in the cabin of the Focus is less impressive that the feature list, and the ambiance is clearly a step down from what you see on a comparable VW. But the latest model’s interior is a step up from that in America’s last Focus, and the seats are comfortable, too. Front and rear legroom is plentiful and the huge, optional panoramic sunroof brings plenty of light into the cabin. Luggage space is excellent, too, especially on the wagon. The longroof Focus adds 134 pounds of girth and just under a foot of length to the cargo area versus the hatchback. 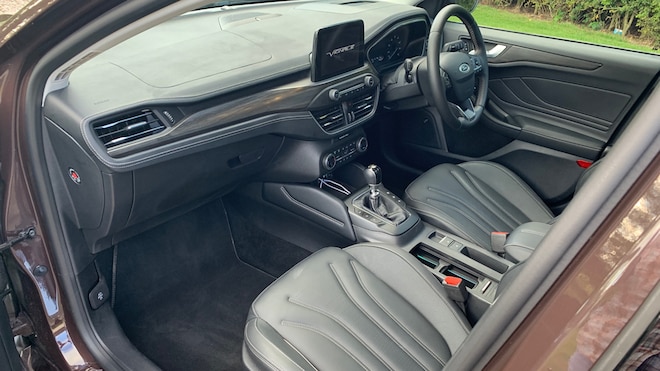 Good driving dynamics have been a key selling point for Ford ever since the first-generation Focus launched in Europe in 1998. And out on the road, it’s clear Ford trickled down some ST and RS sportiness to the more pedestrian members of the lineup. Yet the result is somewhat mixed. Grip is plentiful and the multilink rear suspension—standard on the wagon, optional on the hatch—is clearly comfortable with lumpy, heaving pavement, and the front-wheel-drive Focus offers true throttle adjustability in terms of cornering attitude. But the steering has taken a step back, being too quick and lacking in feedback, which amplifies the chassis’ occasional tendency to follow road imperfections. In this way, it reminds of the previous-gen ST and RS models’ handling quirks—but without the tighter body control to back it up. It’s tough to be smooth through corners and becomes tiring on a longer journey. It’s possible the hatchback handles differently; that version is available with a Sport suspension and adaptive dampers, which may be a better match with the quick steering. Overall, though, it’s a nice-handling car.

Under the hood, the turbocharged, 1.5-liter three-cylinder engine in my test car was a peach. While not offering massive performance, it’s the perfect powerplant for a non-ST/RS, developing 180 horsepower and 177 lb-ft of torque. Ford quotes a zero-to-62-mph time of 8.5 seconds—the low-end torque makes it feel quicker—and a top speed of 137 mph. My test car was equipped with a slick six-speed manual. A torque converter eight-speed automatic is optional (Ford smartly ditched the dual-clutch gearbox for the new Focus, surely due to the drivability and reliability issues that ended up fueling a class-action lawsuit.) 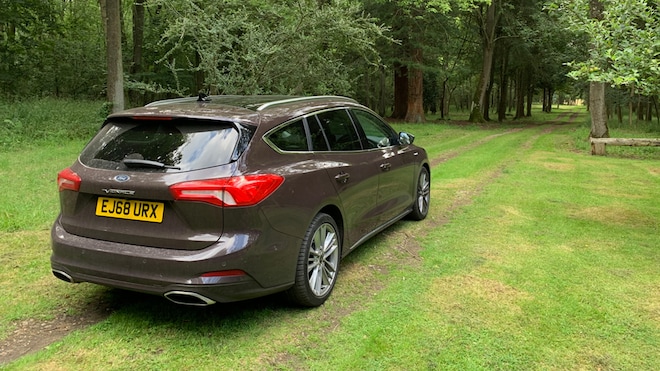 Off-idle torque is plentiful, and it’s also smooth and sounds good, although some of that aural feedback is via the audio system. Carrying the internal “Dragon” designation, the engine features cylinder deactivation, but I never felt it doing its thing, which is good. I averaged an indicated 33 mpg under hard use, and I’m sure a lighter-footed driver could eke out closer to 40, which is excellent given the performance and refinement. Interestingly, the only way to get more than a trio of cylinders in the latest Focus is to order one with a diesel or step up to the new, 280-hp ST model.

Should we be sad this Focus isn’t in Ford’s U.S. lineup? In a word, yes. Outside of the steering and slightly downmarket interior, it’s an excellent competitor for the likes of the Mazda 3, Honda Civic, and VW Jetta. (The standard Golf is, sadly, also being yanked from America). And the Focus looks good. Plus, the hotter ST version would help attract younger enthusiast buyers into the Ford world—as would a new RS. I’m not sure the Mustang reaches a wide enough audience, and the compromised Edge ST and Explorer ST SUVs are really sales-volume drivers, not true performance machines. 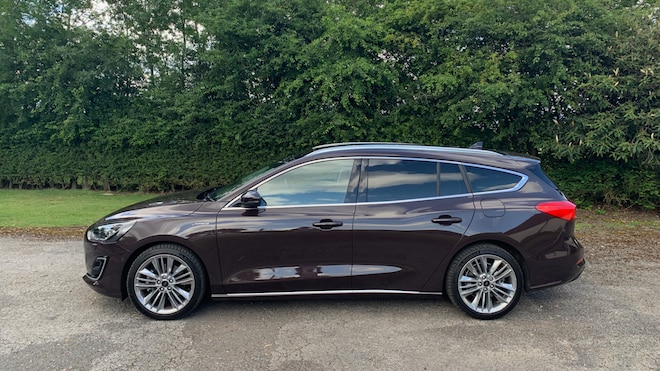 The company has all the ingredients to bring the car back. Hatchbacks aren’t as popular as sedans, but there’s a four-door version. The 1.5-liter engine is impressive and will be offered to Americans in the redesigned 2020 Escape. And the new automatic transmission is surely less of a headache for buyers and Ford itself than the DCT. The tricky part would be getting the costs in order. European buyers tend to be willing to pay more for compact cars, and as long as Ford can make more money on SUVs and trucks here, I see why its focus is not on the Focus. But the automotive landscape can change rapidly, and buyers may switch back to more fuel-efficient cars at any time. If that happens, Ford may wish they kept building and selling the Focus in North America.

The post 2019 Ford Focus Review: How Good Is the Car We Don’t Get? appeared first on Automobile Magazine.