In the run up to the launch of its first car, the Q45 luxury sedan, Infiniti rolled out an ad campaign featuring serene scenes from nature and flowery essays on its guiding principles, with nary a car to be seen. The idea was sound: Take a head-on approach to brand building by espousing the values that could (and would) make Japanese luxury unique. But instead of creating desire, Infiniti created confusion. John Q. Public didn’t really get the point.

Complicating matters, when everyone finally did see the Q45, its styling didn’t exactly garner critical acclaim. It wasn’t quite boxy, and it wasn’t quite swoopy, and its massive chrome oval door handles stood out like—well, like massive chrome oval door handles. Instead of a grille, it had an Infiniti badge the size of a Texan’s belt buckle. Inside, the Q45 was devoid of wood and chrome, something we’d find refreshing nowadays. Back in 1989, it came off as Spartan. 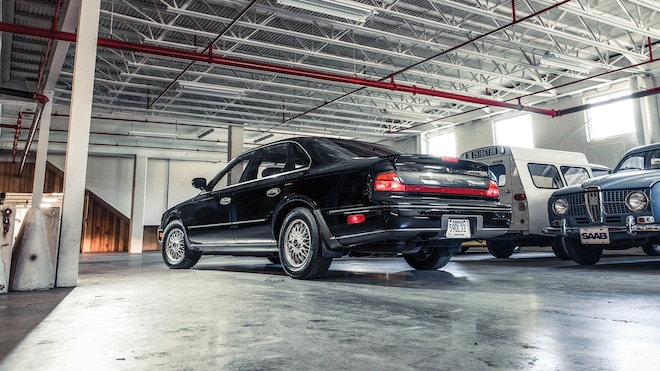 But from an engineering point of view, the Q45 was a masterpiece—no surprise as this was the time when Nissan’s Maxima, 240SX, and 300ZX Turbo were winning over legions of enthusiasts. The Q-ship offered a healthy complement of tech, including a 4.5-liter 32-valve V-8 with 276 horsepower and Nissan’s HICAS rear-wheel steering system from the 300ZX. Our modern-day drive in a 1993 Q45t—a 6,000-mile original from Infiniti’s own heritage fleet—revealed a much different driving experience than its Lexus LS400 contemporary, with a more eager engine, heavier and sharper steering, and a communicative (but no less comfortable) ride. 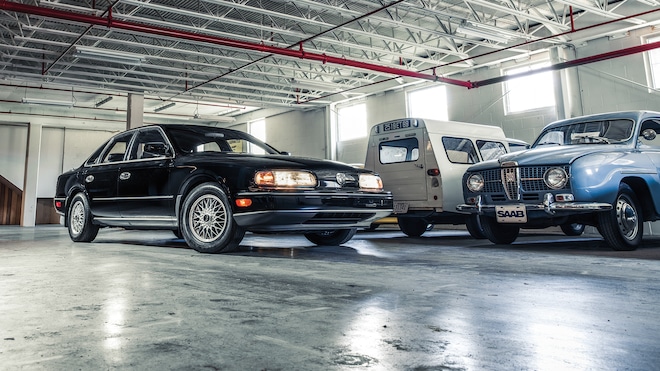 Still, in a five-way comparison in the November 1989 issue of Automobile, the Q45 came in third, besting the Audi V8 and Mercedes 300E but trailing the BMW 535i and champion LS400. “All the ingredients are there,” we wrote. “We marveled over one thoughtful touch after another, reveled in the smooth acceleration, and luxuriated in the idea of Infiniti. But the magic we’ve come to expect from a string of Nissan successes wasn’t there.” When we announced our 1990 All-Stars, the LS 400 made the cut, but the Q45 didn’t.

Infiniti quickly followed up with the smaller M30, a sharply angled coupe and convertible adapted from the Japanese-market Nissan Leopard. “What we have here,” we wrote in May 1990, “is essentially a rebodied Nissan 300ZX for a paltry 24 thousand bucks. When presented with such a thoughtful gift, Miss Manners suggests you offer a heartfelt ‘thank you.’ ” 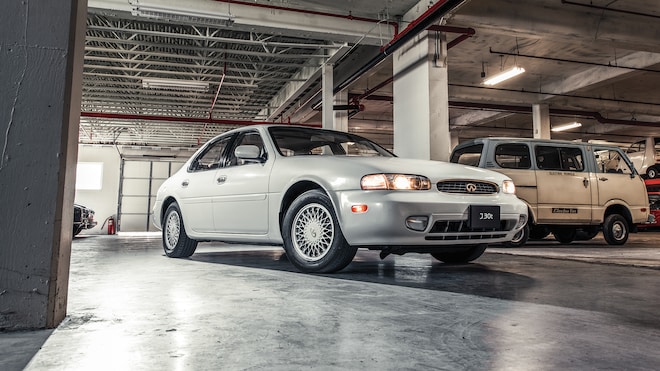 The problem was the M30’s complete lack of family resemblance to the Q45 or the entry-level G20. “There is too little that is truly artful about this car,” we said at the time. “The leather interior looks cold, the controls are fussy, and the instrument panel is a reminder of a particularly clumsy period of interior design, circa 1978.”

Driving the M30 today—a 1,500-mile example of the rare coupe version—we’re amused by its comically boxy dashboard, but we’re also amazed at how well the M30 drives. What we couldn’t know in 1990 is blindingly obvious in 2019: The M30 set the pattern for the G35, the car with which Infiniti would finally find its feet. Alas, the G was still more than a
decade away.

In the interim, we got what is likely Infiniti’s most underrated car: the 1993 J30. Again, Infiniti used the Z-car’s platform with a detuned version of its 3.0-liter V-6, and it even offered rear steering in the Touring model. The interior, a cocoon of leather and wood, with a fuzzy headliner that begged to be petted, showed that Infiniti had learned a thing or two. Best yet, for all its sophistication, the J30 drove like a cultured 300ZX. “Just a wonderful goddamn engine,” wrote Automobile founder David E. Davis. “Very comfortable, very well damped. Looks funny, though.” 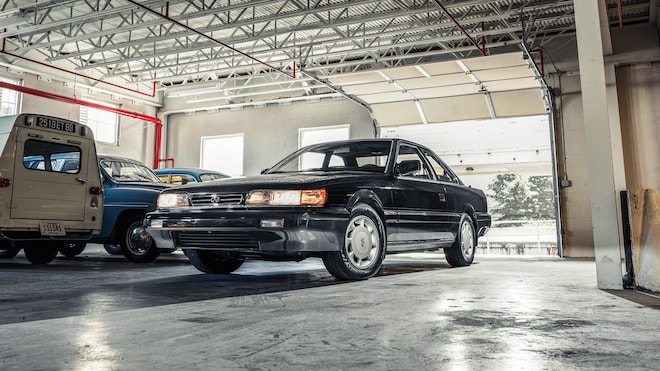 ALTER EGO: The M30 was a 300ZX in disguise, but boxy styling inside and out did it no favors. The G35 would see success with the same formula later.

And that was the J30’s problem: No one could get over how it looked. The oval hindquarters were deliberately designed to be the antitheses of wedge-shaped cars but buyers weren’t ready for it. We praised the engine and suspension at the time, but wrote, “I couldn’t consider it for myself because I’d be embarrassed to be seen in it.”

Today, the J30 strikes us as the most timeless of the heritage Infinitis. Its design, inside and out, has aged so well that it’s hard to believe one is driving a 25-year-old car. It doesn’t feel as athletic as the M30, but it’s quiet, serene, and surprisingly modern.

Still, the J30 never caught on with the public, and it was dropped in ’97, replaced by the more conventional I30. By Y2K, Infiniti’s prospects weren’t looking good, so it set to work on creating something new. Then in 2003, it introduced two vehicles that would revitalize and revolutionize the brand: the G and FX. 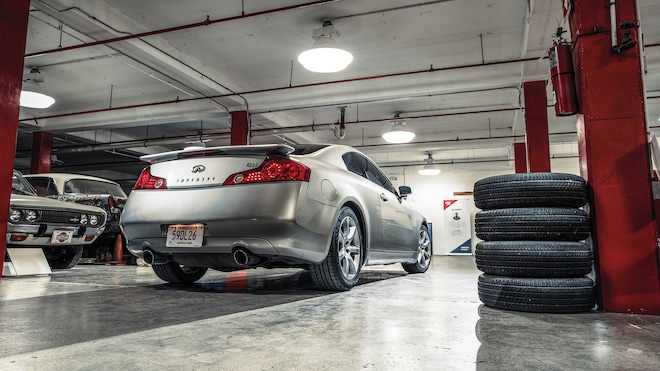 At first glance, the G35 looked like a proper luxury car: curvaceous styling and a modern interior swathed in quality materials. But that’s where the similarity ended. Like the M30 before it, the G35 was basically a Nissan Z on a stretched wheelbase, a sports car through and through with a lusty V-6, heavily weighted steering, and an optional short-throw six-speed manual. We loved it. “Offers a more visceral and aggressive driving experience than the BMW [330Ci],” we wrote. “It grabs you by the seat of the pants and begs you to drive the hell out of it.” No one was surprised when the G35 made the 2003 All-Stars list.

But we were far more surprised by the FX SUV, which not only shared the G35’s Z-based platform but could also be had with a 315-horsepower 4.5-liter V-8 that powered it to 60 mph in 6.3 seconds. We’d only recently been introduced to the idea of a sporty SUV in the guise of the X5, and once again the Infiniti compared favorably.

“In creating the recipe for the wild-eyed FX45,” we wrote in 2002, “Infiniti’s engineers didn’t restrict themselves to the usual—and nearly undetectable—pinch of sport in their utility vehicle. No, they dumped in a whole jar of the stuff. And for the most part, we’re thrilled with the results: blazingly quick acceleration, seriously effective brakes, eager cornering response.” 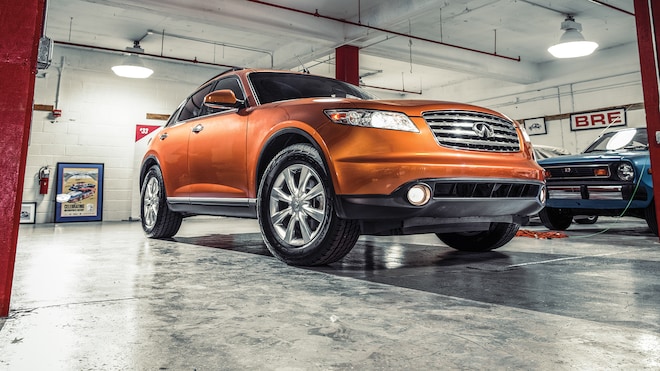 Even by today’s standards, both cars are impressive. The G35 has the feel of a bygone era: The meaty V-6 shudders with its own power, and the steering is so heavy, one wonders if the power-assist pump is low on fluid. It’s a completely different sensation than the lightweight, turbocharged, electric-steering performance cars we drive today. And the FX45? Holy crow. Its naturally aspirated V-8 fires up with a throaty roar that’s nearing endangered species status, and it goes, stops, and turns with a velocity and vivacity that few modern SUVs can deliver.

The G and FX floored the accelerator on Infiniti sales, and the marque rode the wave as long as it could. Too long, perhaps. When the recession hit and gas prices jumped, Infiniti had little to offer buyers looking to downsize their lifestyle. Today, Infiniti is working to reinvent itself, focusing less on raw performance and more on the core values of Japanese artistry it espoused in those first car-free ads. And although its path has been far from linear, one thing’s for sure: Infiniti has shown us one hell of a good time along the way.