Ferrari as a brand just celebrated its 70th anniversary in Maranello, Italy, two years ago and we were there to help them party down. But long before Enzo Ferrari founded his own automaker, he was a race driver himself, then later the manager of Alfa Romeo grand-prix racing activities, and 2019 is thus Scuderia Ferrari’s 90th anniversary. Ferrari felt a celebration was in order, and rightfully so. At the 2019 Pebble Beach Concours d’Elegance, a smattering of competition Ferraris through the years was assembled on the fabled golf course’s first fairway and we found our favorite competition Ferraris to share with you. Forza! 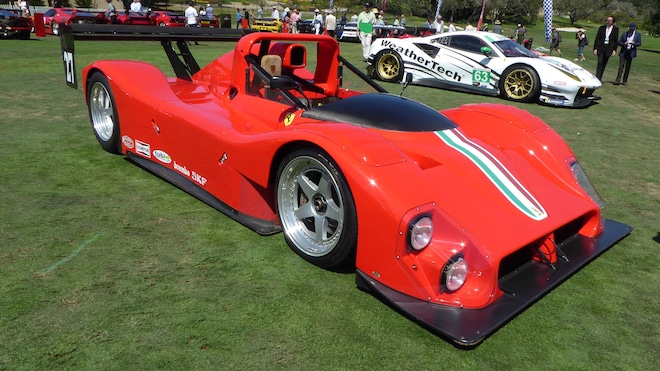 Ferrari re-entered sports car racing in 1994 after a 20-year hiatus with the 333 SP. Jointly developed and built by Ferrari and Dallara originally, the 333 SP was earmarked for the World Sports Car championship and it had success in the IMSA GT championship as well, winning the 1995 and 1997 12 Hours of Sebring. Powered by a 4.0-liter version of the V-12 that was used in the Ferrari 641 Formula 1 car, output was somewhere around 650 horsepower and the engine was said to be quite reliable, as far as race engines go. This car is chassis 027 was originally bought by an Austrian collector and used at noncompetitive track days. It is a late example, built to incorporate several upgrades at a time when the car was aging and losing its competitiveness. 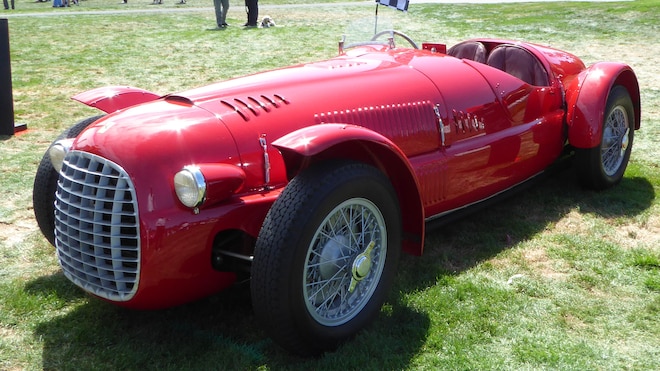 The 166 Spyder Corsa (Ferrari’s official signage incorrectly referred to the car as an Inter Sport-Corsa), was a cycle-fendered, open-top racer that was essentially the second generation of the first Ferrari model produced, the 125 S. This car, chassis 04C, was likely the fourth Spyder Corsa built and one of only two remaining with its original bodywork. The 125 S V-12 engine was enlarged to 2.0 liters for the 166 (remember, in these days a Ferrari’s model number was an indication of its displacement per cylinder in cubic centimeters) and this car was raced by the current owner’s father into the 1950s. Now that’s a family heirloom! 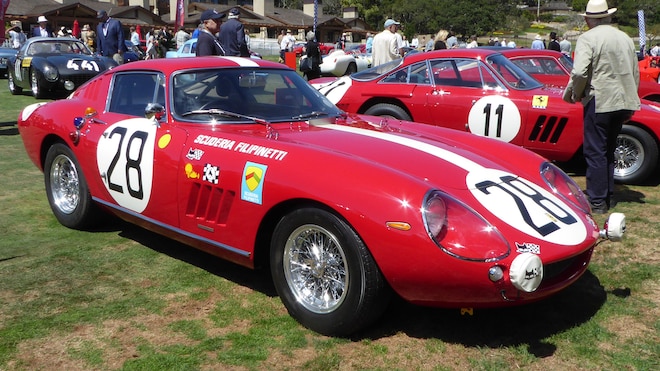 This ex-Scuderia Filipinetti 275 GTB/C is a competition car (hence the ‘C’ in the model name) based on the 275 GTB grand-touring street car. To make the switch from street to track, Ferrari’s competition department skinned this 275 and 11 more like it in lightweight aluminum, fitted a Tipo 213 race engine (a 3.2-liter V-12 making about 320 horsepower at 7,500 rpm), and set about to win some GT-class races. The famed Scuderia Filipinetti team was the first to make use of the car, bringing it to Le Mans in 1967 where it finished 11th overall, ahead of the team’s own Ford GT40 and a Ferrari 412 P—both prototype class cars. The car was sold at Bonhams 2015 Scottsdale auction for $9,405,000. 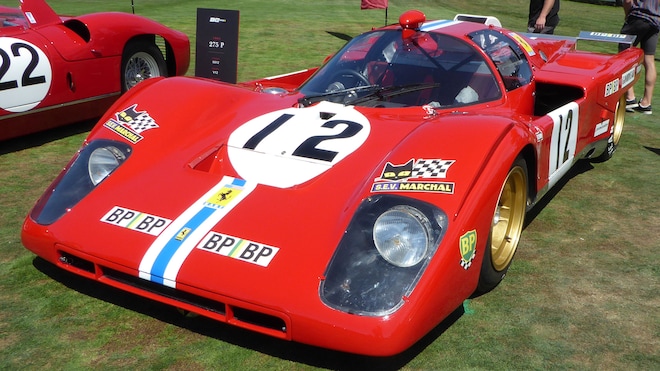 Anyone who has seen the epic racing classic Le Mans is familiar with the Ferrari 512 M as the antagonist to the leading Porsche 917 race car driven by Steve McQueen. This car began life as a 1970 512 S, an all-new prototype race car that Ferrari built to go head to head with said Porsches. When the car went unused in the 1970 season (Ferrari won Sebring in 1970 with another 512 S), the factory converted it to new 512 S spec, with revised bodywork and reliability improvements. It was sold to famed Ferrari importer Luigi Chinetti’s North American Racing Team (N.A.R.T.) in 1971 as Ferrari handed its 512 racing efforts off to privateer team. It finished third overall at Le Mans in the same year. 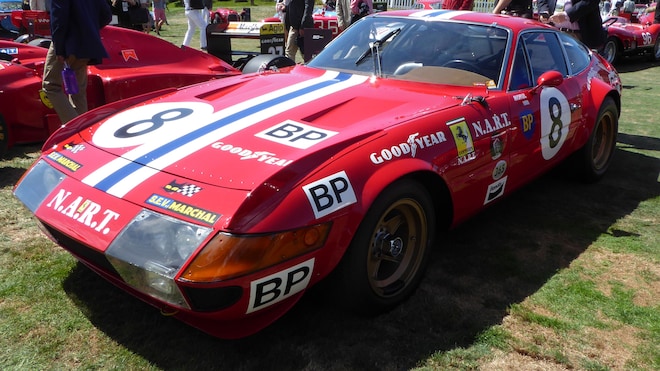 Like the 275 GTB/C above, the 365 GTB/4 Competizione (you’ll sound cooler in the Ferrari crowd if you just call it a “Comp Daytona”) was built first as a street car, then made into a race car with aluminum bodywork and a higher-output engine. Three series of cars were built, this one being a later third series, and the progression from first to third essentially indicated fewer alloy body panels in exchange for wider wheels and fender flares. This car was originally raced by N.A.R.T in the ’73 Daytona and ’74 Le Mans events, crashing out at both. In 1975, it raced under the Interscope banner and won its class at Daytona while also finishing an impressive seventh overall. 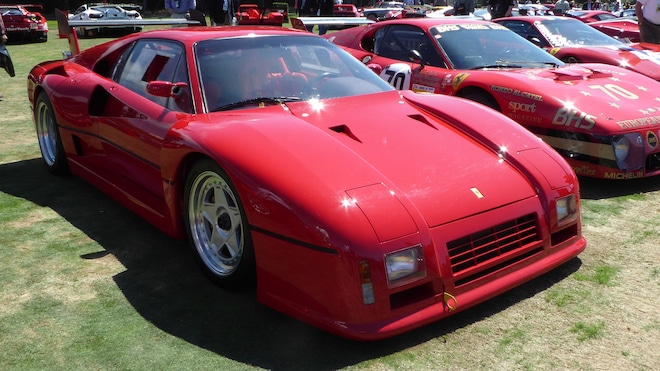 You’ve heard of the 288 GTO, but what of the Evoluzione? Think of it as a bridge between the GTO and the later Ferrari F40. Built as a Group B race car before the class was canceled over safety concerns, the Evoluzione uses a twin-turbocharged version of the GTO’s 2.9-liter V-8; wider, lighter, downforce-inducing bodywork; and larger wheels and brakes. Just six were built and the visual cues to the later F40 production car are readily apparent. Oh, and it’s 650-hp engine had just over 2,000 pounds to push around. Fun! 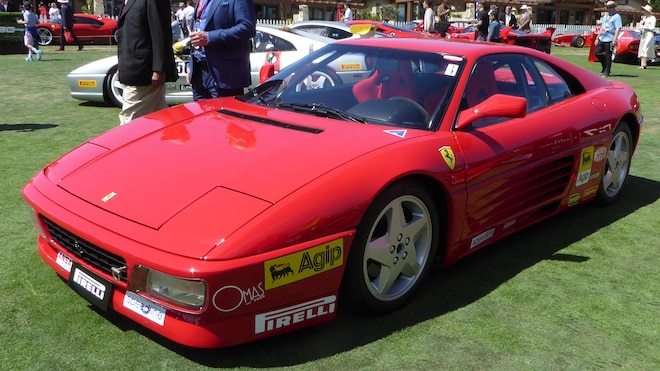 The Ferrari 348 Challenge series was the brand’s first attempt at a “gentleman driver” spec-racing series, aimed at wealthy amateur racers. Races were held only in Europe at first, and the car itself was a lightly modified 348 TB street car with 20 more horsepower (320 total), a less restrictive exhaust system, modified air intakes, beefier brakes to combat fade, and of course sticky race tires, a roll cage, and a full complement of safety gear. The series ran until 1995 when it was replaced by the F355 Challenge, based on the 348’s successor. This car was built as a promotional vehicle and was retained by Ferrari until 1997. Most recently, it was sold for $292,212 by RM Sotheby’s at its auction in Maranello for the brand’s 70th Anniversary celebration. 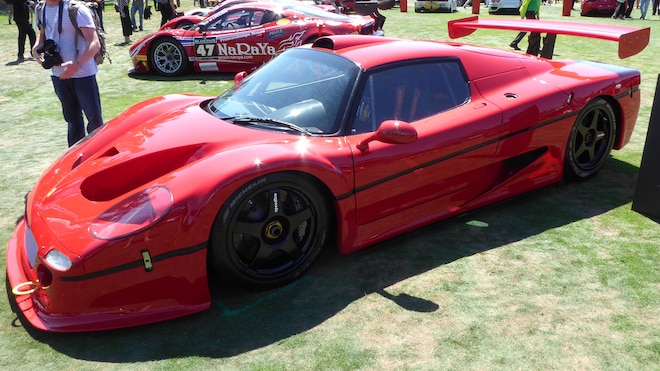 A racing variant on the limited-production F50 street car, the F50 GT was designed to compete in the GT1 racing class, against such competitors as the McLaren F1 GTR and Jaguar XJ220. Unfortunately, the race class’s organizing body changed for the following season and Ferrari was unhappy with the new regulations, which would allow vastly more competitive cars in the series. As a result, just three F50 GTs were ever built, this very car being 001, the initial testing and development example. Six tubs were said to have been built, but the last three were reportedly destroyed. Reportedly. 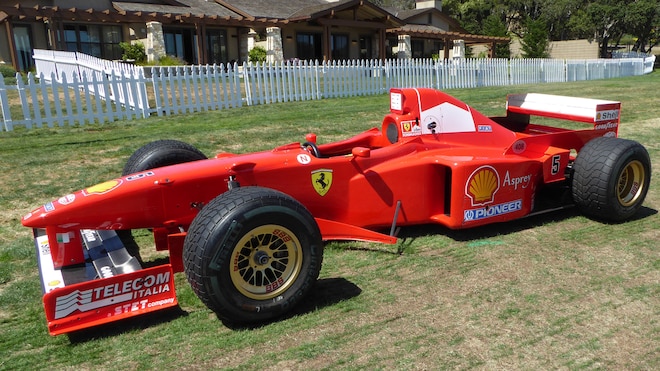 An evolution of the earlier F310, this F310-B was Ferrari’s first Formula 1 car designed with input from new engineer Rory Byrne, who would go on to design six world-championship-winning F1 cars for the Scuderia. While Jacques Villeneuve would clinch the 1997 F1 World Championship in the final round in a Williams-Renault, Ferrari’s new star driver Michael Schumacher would win five races that year, a sign of things to come. This car, chassis 0179, was the second-to-last F310-B built with lighter weight and a larger fuel cell. It boasts a mid-mounted 730-hp, 3.0-liter V-10 engine. Schumacher drove the car for only one race, preferring the dynamics of the previous cars, and teammate Eddie Irvine commandeered 0179 for two more races with disappointing results.

The post Red Mist: A Sampling of the Greatest Ferrari Race Cars Ever appeared first on Automobile Magazine.